In 1969 Congress created a new type of trust that helped charities and not-for-profit organizations generate more revenue for their causes. In addition to being an excellent vehicle to make a charitable gift or bequest, a charitable remainder trust is an effective estate planning and income tax reduction tool. This vehicle allows taxpayers to reduce estate taxes, eliminate capital gains, claim an income tax deduction, and benefit charities instead of the IRS.

A charitable remainder trust is established with irrevocable contributions of cash, marketable securities, closely held stock or real estate. The parties to the trust are the Donor, the Trustee, the Beneficiaries (also called the Recipients, and the Charitable Remainder Beneficiaries (Charity or Charities). The Donor contributes assets to the trust. The assets are typically sold and the proceeds reinvested by the Trustee. The Trustee makes payments for life or for a term (not exceeding 20 years) to the Beneficiaries according to the terms of the trust. At the termination of the lifetime interest (death of all primary beneficiaries) or the designated term the Trustee distributes the remaining trust assets to the Charitable Remainder Beneficiaries. 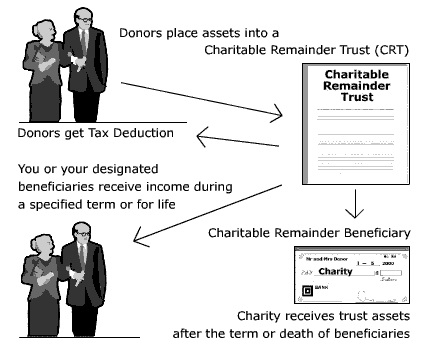 At the creation of the charitable remainder trust, the donor receives an income tax deduction for the present value of the future gift (the “charitable remainder”) the charity will receive when the trust terminates. That value is calculated based on actuarial tables, taking into account the value of the property transferred to the trust, interest rates, the age of each beneficiary, or the term of the trust if it is for a specific number of years. If he or she cannot use the entire deduction that year, it may be used over the next five years.

Once the assets are inside the charitable remainder trust, there are no taxes from the sale of the assets transferred to the trust. Therefore, transferring appreciated assets to a charitable remainder trust, which in turn sells them and re-invests the proceeds in income-producing property, provides the trust the full value of appreciated assets without capital gains. The assets are removed from the gross estate of the donor and the recipient receives an income for life or for a specific term.

While the charitable remainder trust is an irrevocable trust, the donor under certain conditions can be the trustee as well as the beneficiary of the charitable remainder trust. As trustee he or she has control over the administration of the trust and investment of trust assets. That individual can name successor trustees or alternate trustees and can retain the right to change designation of trustee at any time.

The charitable remainder trust is structured in one of two ways:

In most cases, payments from a charitable remainder trust are made for the lives of the beneficiaries. However, you can also specify that payments be made for a fixed term of up to 20 years. An example for the use of this option could be to offset the cost of tuition (usually four to eight years) for a child or grandchild. Once the trust is established the payment term may not be changed.

What about my heirs? If the charity gets the asset my heirs get nothing? Answer: To insure the children’s inheritance stays in tact, some of the monthly income generated by the CRT can be used to purchase life insurance on the donor’s life. When the donor dies, the policy replaces the approximate value that was given to the charitable trust. The life insurance is purchased by an irrevocable life insurance trust to avoid incidence of ownership avoiding the death benefit being included in the donor’s estate.